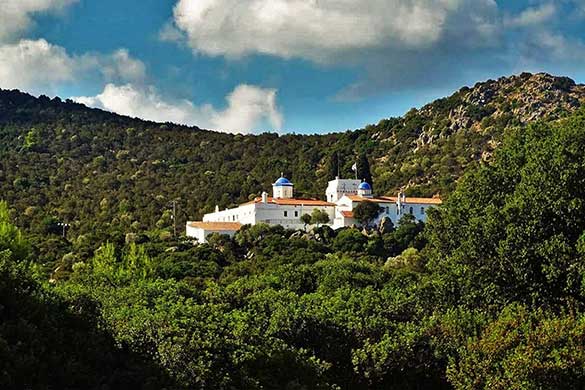 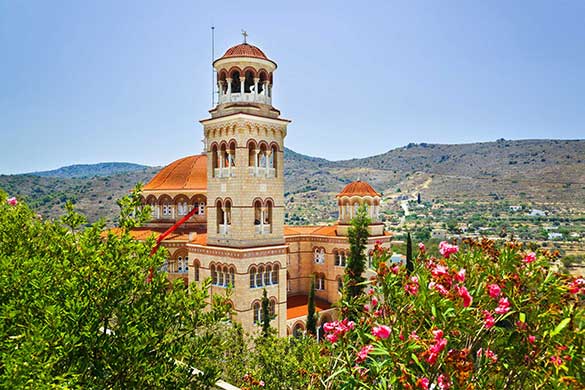 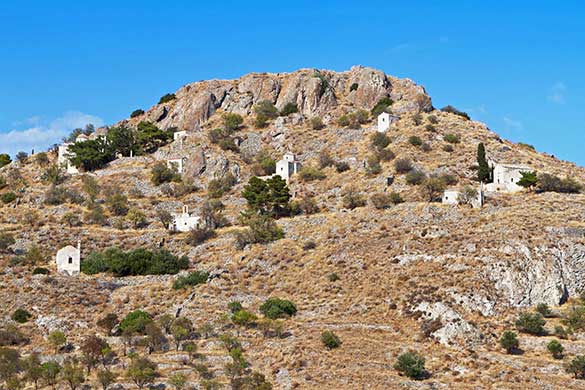 The Monastery of Saint Nektarios was built around 1904-1910 by the bishop Pentapoleos Nektarios. Nektarios lived in the Monastery and died in 1920. In 1961 he was declared a Saint. The Monastery is on the road to Saint Marina and it's about 6 kilometers away from the town of Aegina. The church has two tall bell-towers and 4 rows of windows which all have red archs for crowning.

Fourteen nuns live in this Monastery. The Monastery celebrates on 9th November and thousands of people gather on this day from every part of Greece. There are many rows and dedications made from a great numberof worshippers in this Monastery.

It's a womans Monstery and 10 nuns live there. The Monastery is in a valley and it's surroundes with tall cypresses.

Virgin Mary Xrisoleontissa's Monastery was built in the early 17th century. It has high walls and it looks more like a fort. It was built that way because the monks were afraid of the pirates. You can communicate with the Monastery through a big door. It's a big, two storey building with a garden in the center in which there is a church and next to it, a three-storey tower.

The tower rises above the valley and it was built around 1600. The church was built in 1800 in place of the old one which was burned.

The church has an elaborate carved icon screen, beautiful murals and Virgin Mary's icon. The Monastery was very rich and in its possession was the biggest part of the island.

During the 19th century, most of the fields of the Monastery expropriated and the monks left. From the year 1935 the Monastery became feminine and ten nuns live there ever since. The Monastery celebrates on 15th August and the biggest festival of the island takes place on that day.

Near the village called Asomatoi, outside the town of Aegina, is the church of Saints Theodoron, which is a church of the 19th century. There is an arch above the door of the church which once had the Saint's icon on it.

Inside the church, we can see beautiful murals that are in a very good condition. The church was built in 1828 according to a sign which is above the door and on the left.

The Church of Faneromeni

Faneromeni is on the new road to Saint Marina (Faneromenis street). Below the exterior church of the 13th century are two smaller churches, that have been saved. In the second church, there is a wonderful icon of Virgin Mary.

Behind the chancel Table, a passage leads to a small cave. The church, the vineyards and the orchards belong to Xrisoleontissa's Monastery. The church celebrates on 25th March on Annunciation day.

Palaioxora, today looks very much like a place called Mistra, with churches and ruins from houses. Only the churches have survived and the murals aren't in a very good condition. The church of Saint Nikolaos (13th century) is not very far from Palaioxora. It has many murals some of which are dated back to 1330.

Next to it is the church of Stavrou which celebrates on September. On the left is the Bacilica of Saint George the Catholic. Later on, the church was named Virgin Mary the Foritissa.

As we continue, we see the Cathedral of Saint Dionisiou who was the bishop of the island from 1576 to 1579. The Saint lived in a cell which still exists. Southern, there is a small church which is dedicated to Santa Anne. Another church that we find is a domed Basilica which is built inside a rock.

Further up and on the left from this church are the ruins of a castle which was built by the Venetians in 1654. From Saint Dionisio's cell, a path leads around the hill passing by the church of Saints Theodoroi and below that the church of Taxiarxon. The Monastery of Santa Kiriaki was the center of Palaioxora from the 12th century until 1830. Santa Kiriaki is a double Basilica with beautiful murals.

Aegina offers you great activities to keep your holidays unforgettable. 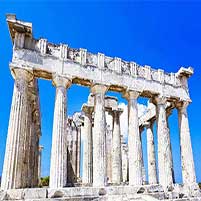 THE ANTIQUITIES OF THE AEGINA 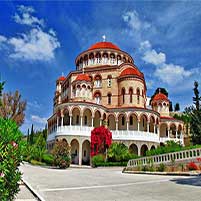 THE MONASTERIES OF AEGINA 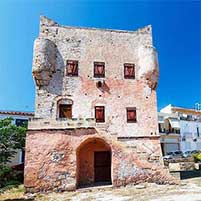 In the city of Aegina you can visit the Tower of Markellos, which housed the first Greek anti-governmental committee from 1826-1828, the Metropolitan Cathedral of Aegina, the Eunardios School of Teaching, the Government House, the Municipal Library of Aegina and the Orphanage of Aegina 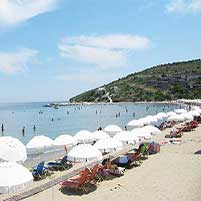 THE BEACHES OF AEGINA

You can swim in the two beaches of Aegina, at Souvala beach, at Vagia beach, at Agia Marina beach, at Portes Beach, at Marathonas Beach, at Aeginatissa beach, at Perdika beach and also at the beautiful waters of the island of Moni, which has only deers, small horses, wild boar, peacocks, pheasants and squirrels.